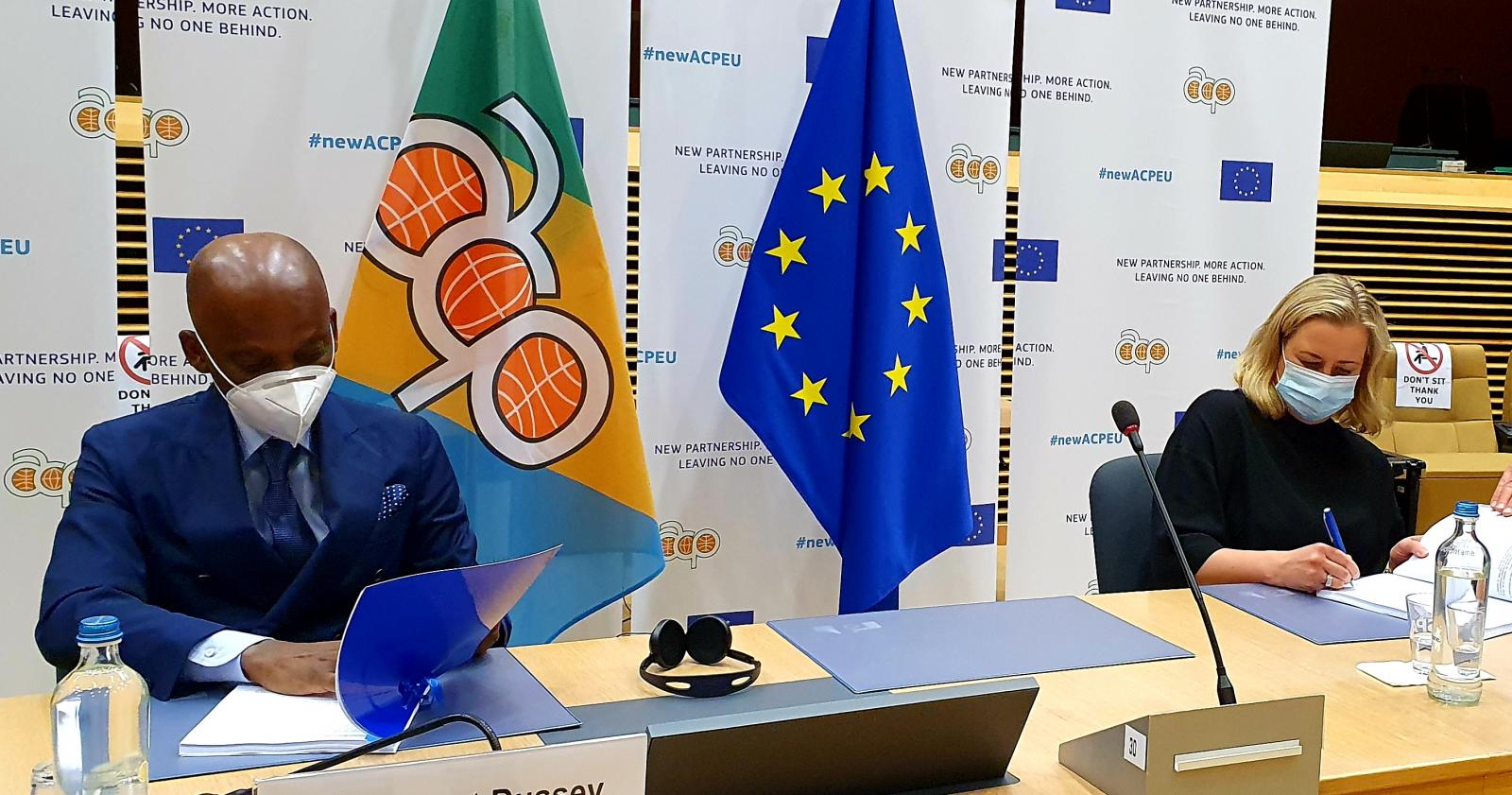 Brussels, 15 April 2021/OACPS/EU: Today’s initialling of the new Partnership Agreement between the European Union (EU) and members of the Organisation of African, Caribbean and Pacific States (OACPS, formerly known as the ACP Group of States) by the chief negotiators, International Partnerships Commissioner Jutta Urpilainen, and Togo’s Foreign Minister Robert Dussey, marks the formal conclusion of the negotiations of the Post Cotonou Agreement, setting the political, economic and sectorial cooperation framework for the next twenty years.

Commissioner for International Partnerships and EU chief negotiator, Jutta Urpilainen, said: “This new and comprehensive partnership with the largest group of partner countries is a major political achievement and marks a turning point. In tune with the new international realities and challenges, the Agreement is expected to be game-changing in strengthening the EU’s bilateral relations with each individual OACP State and their respective regions, positioning the OACPS-EU partnership as an international force to advance common ambitions on the global stage.”

Professor Robert Dussey, Togolese Minister of Foreign Affairs, Regional Integration and Togolese Abroad, Chairman of the Central Negotiating Group and Chief Negotiator of the OACPS, said at the end of the formal conclusion of the negotiations: “The new agreement embodies the ambitions of both Parties to renew the terms of their cooperation and to reposition their partnership around new objectives in a world that has changed profoundly and is constant transformation. The negotiation process was by no means without challenges, but I welcome the final outcome and congratulate all the actors whose work has led to an agreement that includes a common core and three regional protocols. By taking into account the concerns and expectations of the OACPS states, the new agreement constitutes a solid basis for further reinforcing the already strong relationship with the EU. Together we will work to address global challenges and we will do this in close cooperation with other partners on the world stage.”

The Agreement, that will succeed the Cotonou Agreement once both sides complete their internal procedures for signature and conclusion, sets the scene for alliance-building and more coordinated actions on the world stage where the group’s impact can be significant to tackle some of the most acute global challenges. Together, the EU and the members of the OACPS represent over 1.5 billion people and more than half of the seats at the United Nations.

The new Agreement substantially modernises the cooperation and extends the scope and scale of the EU and OACPS’ ambitions to better address current and future challenges. Partners have raised their commitments in priority areas such as: human rights, democracy and governance, peace and security, human development which encompasses health, education and gender equality, as well as environmental sustainability, climate change, sustainable development and growth, and migration and mobility. The Agreement also includes a strong new regional focus and governance structure, tailored to each region’s needs, a first in over forty years of collaboration.

The signature, provisional application, and conclusion of the Agreement will require the approval by the Council of the European Union, based on proposals from the European Commission. These proposals, together with the negotiated text translated into all EU languages, will be transmitted to the Council in the coming weeks.

The Council will decide on the conclusion only after having received the European Parliament’s consent, as indicated in Article 218 (6) of the Treaty on the Functioning of the European Union (TFEU).

The signature of the Agreement is expected in the second half of 2021. For its entry into force, the parties will have to complete their respective internal procedures.

The post-Cotonou negotiations started in September 2018 in the margins of the United Nations General Assembly in New York. The aim was to agree on a new agreement to succeed the Cotonou Agreement and adapt the EU-OACPS relations to the new realities.

The Cotonou Agreement was initially due to expire in 2020, but its application was prolonged until 30 November 2021, unless the new Agreement enters into force or is provisionally applied before that date.

The draft text that was agreed after over two-and-a-half years of negotiations, presents an ambitious and strengthened political partnership between the EU and the members of the OACPS with the objective of generating mutually beneficial outcomes on common interests.

Concretely, the Agreement is composed of a “common foundation”, which sets out the values and principles that bring partners together and indicates the strategic priority areas that both sides intend to work on. These are: (i) Human Rights, Democracy, and Governance in People-Centred and Rights-Based Societies (ii) Peace and security, (iii) Human and social development, (iv) Environmental sustainability and climate change, (v) Inclusive sustainable economic growth and development, and (vi) Migration and mobility.

The Agreement combines this foundation part with three specific, action-oriented regional protocols (Africa, Caribbean, Pacific) which focus on each region’s needs. The regional protocols will have their own specific governance to manage and steer the relations with the EU and different regions involved, including through regional parliamentary assemblies. There will also be an overarching joint OACPS-EU framework with a strong parliamentary dimension.

In April 2020, the ACP Group of States became the Organisation of African, Caribbean and Pacific States (OACPS), an international organisation with 79 members, following the entry into force of the revised Georgetown Agreement.